Learning to Preach in the Anthropocene

This was the intriguing title of a presentation by Emeritus Professor the Rev’d Dr Graeme Garrett to a group of people, Anglicans and others, at a Workshop reflecting on the recent Encyclical by Pope Francis called Laudato Si. 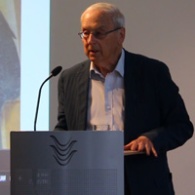 After explaining that ‘Anthropocene’ is a proposed name for the current geological epoch in the history of earth, Graeme spoke compellingly about the common failure of preachers to preach with equal vigour about God the Father, as “creator of Heaven and Earth, of all things seen and unseen,” compared to their preaching about Jesus as Lord and Saviour, and of the Holy Spirit as the empowerment of God among us.

He raised with us the difficulties of speaking about the eco-sphere and in fact all creation without raising concerns among our congregations about us preaching politics.  Reflecting the views of so many, recent Presidential aspirant in the USA, Jeb Bush said “I think religion should be more about making us better as people and less about things that end up getting into the political realm.”  This attitude makes it hard to speak about Eco-Theology without some of our listeners feeling we are over-stepping our mandate in preaching. 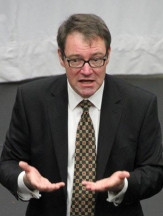 In addition to this we were treated to a lecture entitled “The ‘Priesthood of all Believers’: Human Beings and Creation from an Orthodox perspective.”  by the Rev’d Dr Gregory Seach, Warden of Wollaston Theological College in Perth.  What came through was that in the Orthodox tradition there is a sense that Creation Theology is in fact at the centre of all theology.

Beginning with the notion of the Priesthood of All Believers, Gregory made a convincing case for an egalitarian view of ministry in the church despite the existence of an ineradicable hierarchy in Catholic, Anglican and Orthodox expressions of the Church. Since all ministry – undertaken by lay or clergy – is an expression of the ministry of Christ, whoever is undertaking the ministry is in fact standing in Christ’s place.  “This is what it means,” he said, “to be part of the body of Christ.”

He then sought to make a link between Adam as the first human of Creation, and Christ, sometimes referred to as a ‘Second Adam’.  He teased out parallels between the temptation of Adam and Eve in the Garden by Satan and the temptation of Christ in the Wilderness by this same deceiver.

In the Garden, Satan said them “You will not die.  God said that because he knows that when you eat it you will become like God.”  The temptation here was to turn creation to his own ends, effectively usurping the role of God.

In the Wilderness, Satan finds in Jesus a determined refusal to usurp the role of God or do anything that was against the laws of nature.  At every challenge, Jesus says “No!”  In doing this he is demonstrating what was later declared in Paul’s letter to the Philippians – ‘He always had the nature of God ..[but] of his own free will he gave up all he had’ becoming a human and taking seriously his new relationship to God as a human that meant he too, would die.  For him to have done otherwise would have been to usurp the role of God.

These two stories provide book-ends on the period of sin because the refusal of Jesus undoes the acquiescence of Adam and this takes us right back into the Creation story as those blessed of God again.

As if to make sure we understand that the ending of Jesus’ life would take us back to the Creation story, the Passion Narrative in John’s Gospel begins with Jesus and his disciples crossing the Kidron Valley and going to a garden called Gethsemane or the Mount of Olives in the Synoptics.  Three days later the risen Jesus is first experienced by some women in the Garden.  With these images the Gospel writers have placed Creation right back into the centre of the story – Paradise has been Regained as Milton eulogised.

Gregory then took us into the liturgies of the Church where we find connections to Creation all over the place.  It is there in the Gloria where we affirm God’s proclamation of ‘Peace to all God’s people.’  It is there when we affirm our faith in the Nicene Creed, saying  ‘We believe in one God, the Father, the Almighty, maker of heaven and earth, of all things, seen and unseen.’  It is there when we pray the Lord’s Prayer to a Father who is in Heaven and whose will is to be done in heaven and on earth.  It is there when we speak of our Lord, ‘The God of all creation’ when we give thanks for the gifts that have been brought to the altar.  And it is present in each and every Eucharistic Thanksgiving Prayer in APBA.

This leads then to some very reasonable questions.  Why is it that Creation is so absent from our consciousness about theology and God?  Why is it that when the Season of Creation or Sustainable September liturgies are used in churches, some, at least, of the people feel like we are getting too political in church?

“Today … we have to realise that a true ecological approach always becomes a social approach; it must integrate questions of justice in debates on the environment, so as to hear both the cry of the earth and the cry of the poor.”

One thought on “Learning to Preach in the Anthropocene”