My life has always been framed within the Christian faith.  My father was a Churches of Christ minister and I, together with my wife, was ordained a Churches of Christ minister a long time ago.  Nearly two decades later my wife and I were ordained again – as Anglican Deacons – and from that time we each spent a decade or more involved in ecumenical ministries that have broadened understanding of Christian and religious pluralism.  While I am now semi-retired and working very part-time in an Anglican Parish church, my wife exercises her Diaconal ministry on the staff of the Justice and Mission Unit of the Uniting Church Synod office in Western Australia, and my son and his wife are Salvation Army Officers working in a  corp in country Victoria.  So, Christian pluralism is what we do. 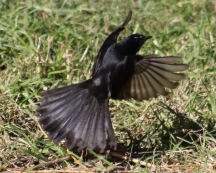 The name of this blog was inspired by a story I heard from an elder of the Nyungar people – the indigenous people from around where I live.  A small wren-like bird, called in their language DjittyDjitty, has a very significant place in their lore.  Its presence is often an omen of death, yet it is always welcome.  Its natural habit is of great courage, being willing to tackle wedge-tailed eagles and ravens that stray too close to their nest.

In Nyungar culture there is a customary system of payback when personal rights are infringed or injury caused.  This takes place in the form of spearing where the family of a victim are able to throw spears – over a distance – at the wrong-doer.  They may miss their target, but they may also inflict serious, even fatal, injuries.  Occasionally harm may be caused by an accident that appears to have been personally inflicted.

Where the families cannot decide, the Elders are called in to adjudicate.  If they cannot decide whether it was intentional or accidental a ritual begins with an Elder as the Djitty Djitty – the Go-Between.  The aggrieved party can do pay back, but the perpetrator has the help of an Elder.  He stands in front of the target person and the two of them dance. The elder has told him “When I go this way, you go this way.  When I go that way, you go that way.”  Since the elder has done this many times he is clearly good at dodging the spears – but he places his life between the throwers and the victim.

The allusions of this to my understanding of aspects of my Christian faith prompted the title and my use of DjittyDjitty as a handle I use in many forums.